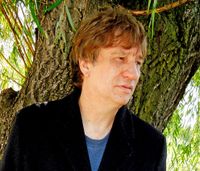 Gary Browe (pronounced “GA-ree BROH”) was born in Detroit, Michigan and grew up in the 1960’s in the tiny pocket of Southwest Detroit called the Vernor Springwells district.  From his neighborhood he could clearly see the Ambassador Bridge and the 4th of July fireworks celebration in Downtown Detroit.

Growing up, Gary was immersed in the activity of his blue-collar neighborhood. Late nights were spent with his ear was pressed to his tiny transistor radio listening to the music hits of the early 1960’s on CKLW or tuning in to Tiger Baseball on WJR.   In the corner bar, where his family would gather for fish fry on Friday nights, is where he first heard The Beatles playing “I Want to Hold Her Hand" on the jukebox.

Gary began playing guitar in the 6th grade.  He remembers holding a black Harmony guitar at a neighbor’s house and that night having dreams of playing it.  He pestered his parents for a guitar until his father, most likely tired of hearing about it, said, “I’ll rent you a guitar and pay for lessons and after 10 lessons, if you are still interested, I will buy you a guitar of your own.”  Gary took lessons at Berenger’s Music on West Vernor in Southwest Detroit.   He spent many hours in the store where rows of vinyl records fueled his interest in music.  Gary spent much of the money he earned from cutting lawns buying records.  The first record he purchased with his own money was an album called Distant Shores by Chad and Jeremy.

When Gary was 15, he played electric guitar in a band but soon discovered that music of James Taylor and Joni Mitchell was more appealing to him.  His interest in the band faded and he switched to acoustic guitar. This was about the time he began writing his first songs.   At 17, he played his first performance at the Hinge Coffeehouse where he played a half-hour guest set of original songs.   Sadly, he only remembers one or two of those songs from those early years.  However, one of those songs, Memory in the Rain, has made it to his latest release, Red Sky Remembers, released in December 2019.

It really wasn’t until Gary was 40 and graduated from college after many years of night school that his songwriting reappeared.  For a graduation present, him and his daughter drove down to Nashville to Gruhn Guitars where he purchased a new Martin D-41 Guitar. Buying that guitar started it all again and Gary soon found himself writing new songs that seem to spring from a well that had been covered up too long.

"Music is your out", his mother would say to him, meaning that his music is his  escape.   Gary spends much of his free time playing guitar, writing songs and attending local music concerts at Michigan venues like The Ark and Trinity House Theater.   In 2015, he released the Watercolor album.  In 2016, he released Songs and Images, which comprises of many of the songs from Journal Entry completely remixed and remastered.   In 2019 he released his third album, Red Sky Remember.

His fourth studio album, This Perfect Day,  will be released in April 2023.   Recorded and mixed from June to November 2022 by David Roof at Rooftop Recording in Grand Blanc Michigan.  The album  features three songs with the Flint Symphony String Quartet.

As long as the songs keep flowing, he’ll strive to record them in the sparse style he seems most comfortable in.  He is a true late bloomer and feels great about being able to retire from his day job and concentrate on his music.  He feels very blessed to be part of a vibrant music community in SE Michigan where he draws inspiration from all of the wonderfully gifted songwriters that make SE Michigan their home.